WHY WE LEAVE TAILS AND DEWCLAWS INTACT

Tail docking and dewclaw removal in working dogs is a practice that is increasingly disallowed by veterinarians and breeders in countries around the world. Hunter's Heart does not dock tails or remove dewclaws of our Brittanys.

I've been breeding Brittanys since 1999, and have been leaving tails and dewclaws intact for about a decade, without any apparent increase in injuries, in the field and indoors.

Did you know that under the Canadian Kennel Club rules, Brittanys are the only breed that are disqualified from shows due to intact tails? While docking and cropping is illegal in Alberta (and many other provinces and countries around the world), I'm frequently asked why I do not dock tails and remove dewclaws.

The answer is simple: research suggests that the risks of docking tails and removing dewclaws outweighs the potential benefits.  Some scientific evidence is explored below.

Dewclaws are in a similar position as human thumbs. The top left photo shows Vite running at full speed, you can see where her dewclaw would touch the ground while cornering. The top right photo shows Mav Fauvelle in the field retrieving bumpers (used with permission from Miles Johnson). The video shows BliZZard training jumps for AKC agility (with Andrea Lee). 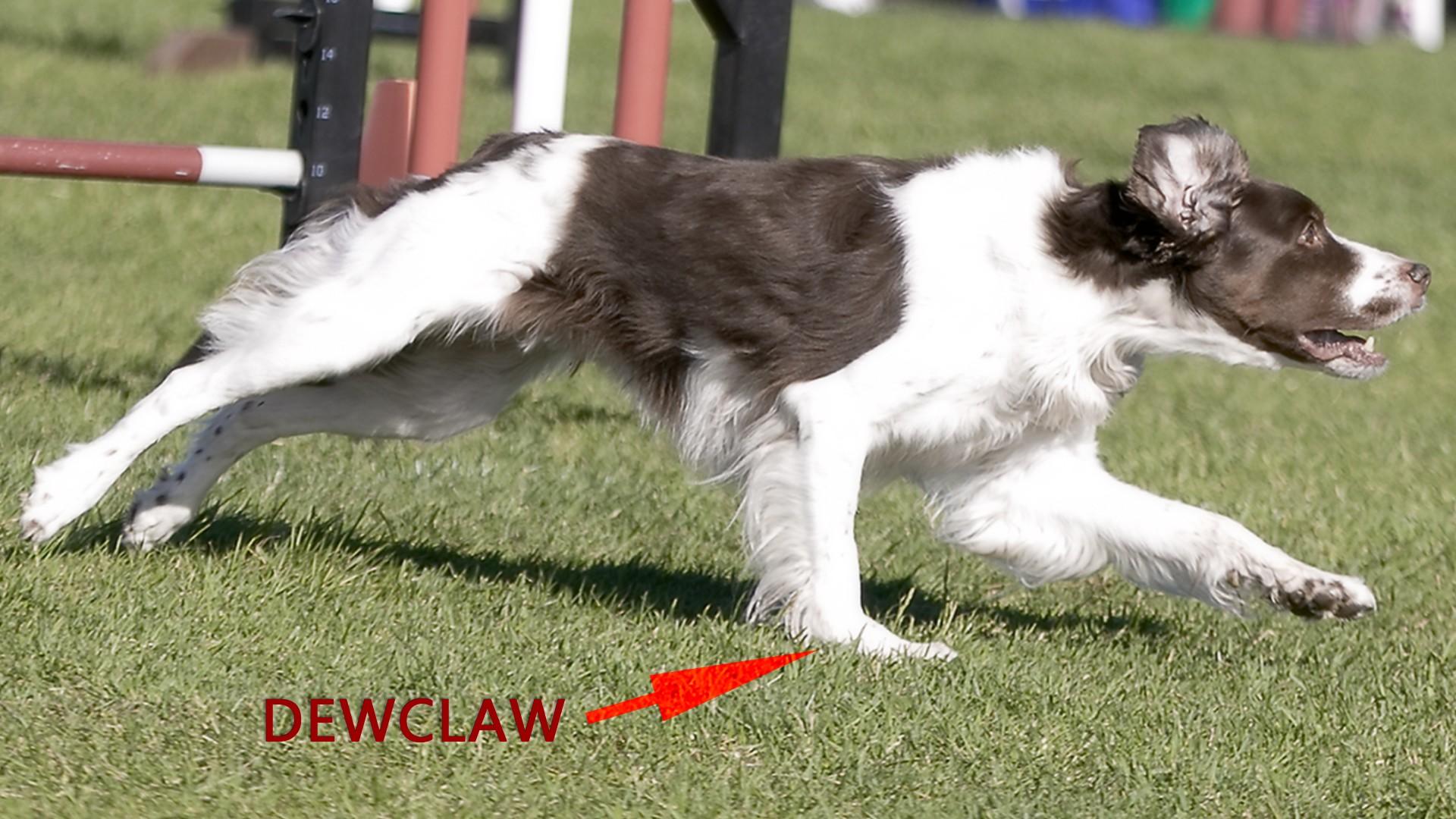 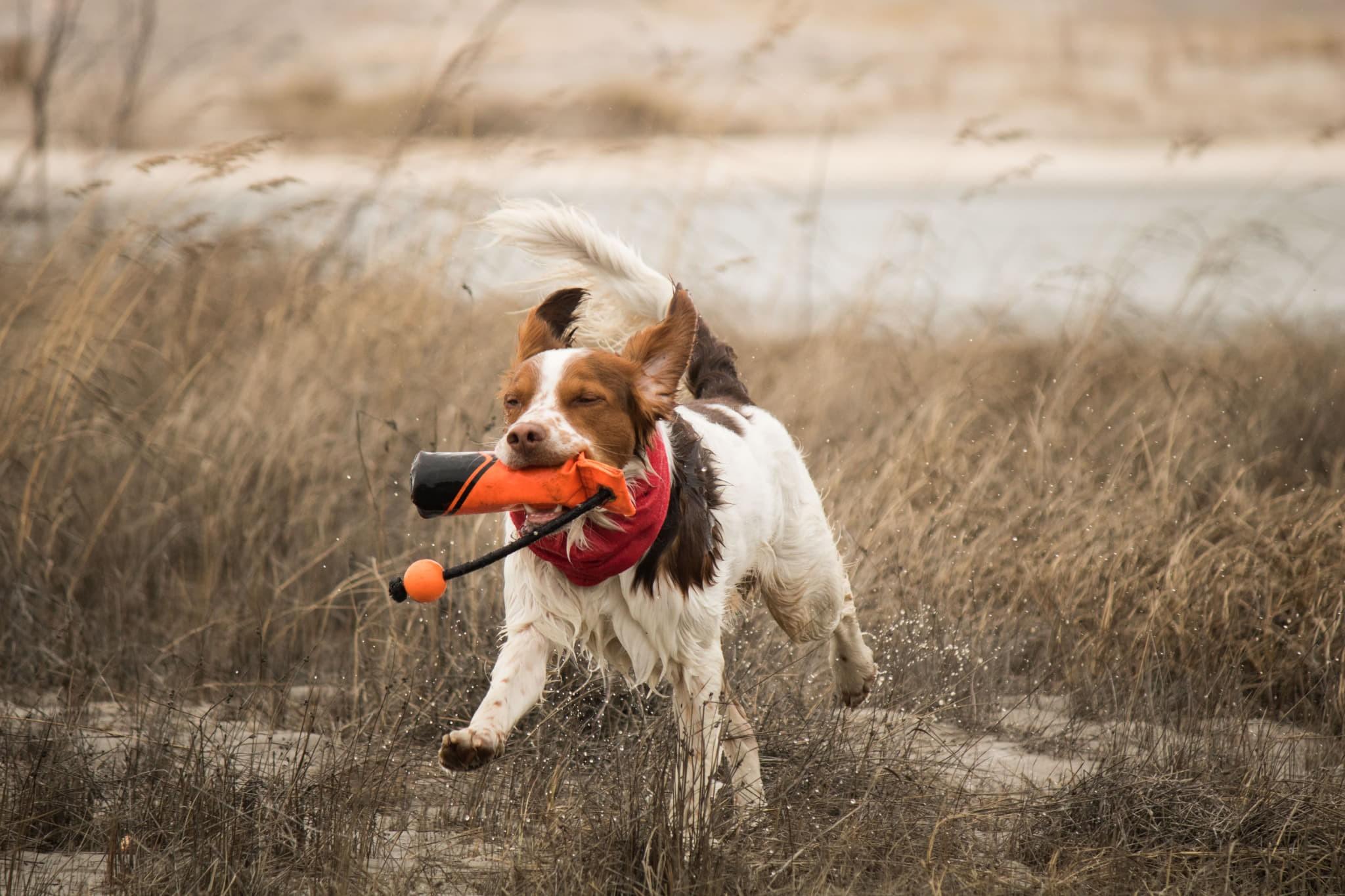 Kessler summarized: “The tail is not a limb but is an appendage… the muscular structure and activity are in integral part of the normal bodily shape and function, especially the perineal region… The tail is known to be a counter-balance for dogs in action, especially when moving at high speeds, turning sharply, balancing, jumping or climbing, and, according to traditional water-dog breeds, a rudder in the water. One study using camera and electromyographic imaging confirmed ‘tail movements are important in maintaining body balance during locomotion'”.

We support the CVMA Position Statement on cosmetic alteration. According to the American Veterinary Medical Association Canine Tail Docking FAQ, justification of carrying out preventive tail amputation on working dogs “lack substantial scientific support. In the largest study to date on tail injuries in dogs… calculated that approximately 500 dogs need to be docked to prevent one tail injury”. In fact, Diesel et al surveyed over 138,000 dogs in Britain and found that the risk of tail injuries was 0.23 %. Of those, 36% were injuries in the dog’s home, with 14% occurring when the tail being caught in the door, and kenneled dogs faced increased risk. Houghton showed that the risk for gundogs in Britain varied according to the type of work performed: flushing dogs in the beating line were at greatest risk and pointing dogs had the least number of injuries. (Brittanys are pointing dogs.)

According to Mastering Jumping Skills, “the tail helps with rear-end awareness, turning, jumping, balancing, accelerating, and braking. When the dog takes off for a jump, his tail is low; but as he crests the jump, his tail rises. This tail movement helps shift the dog’s center of gravity and raises the dog’s rear end to clear the jump. As the dog lands, the tail comes back down to help the dog find his balance…. Dewclaws add stability by digging into the ground as the leg rotates, especially when the dog is bearing weight on one front leg, as when he lands from a jump. Dogs without dewclaws will put more stress on their shoulders and spine when turning” (Linda Mecklenburg, DVM, 2015).

Some researchers compare the function of dog’s dewclaws to the function of human thumbs. According to Chris Zink, DVM, PhD, DACVSMR, “there are 5 tendons attached to the dewclaw… Those muscles indicate that the dewclaws have a function. That function is to prevent torque on the leg. Each time the foot lands on the ground, particularly when the dog is cantering or galloping, the dewclaw is in touch with the ground. If the dog then needs to turn, the dewclaw digs into the ground to support the lower leg and prevent torque. If the dog doesn’t have a dewclaw, the leg twists. A lifetime of that and the result can be carpal arthritis, or perhaps injuries to other joints, such as the elbow, shoulder and toes”. She elaborates based on her extensive work with canine athletes regarding potential dewclaw injuries: “Most veterinarians will say that such injuries actually are not very common at all. And if they do occur, then they are dealt with like any other injury. In my opinion, it is far better to deal with an injury than to cut the dew claws off of all dogs ‘just in case'”. 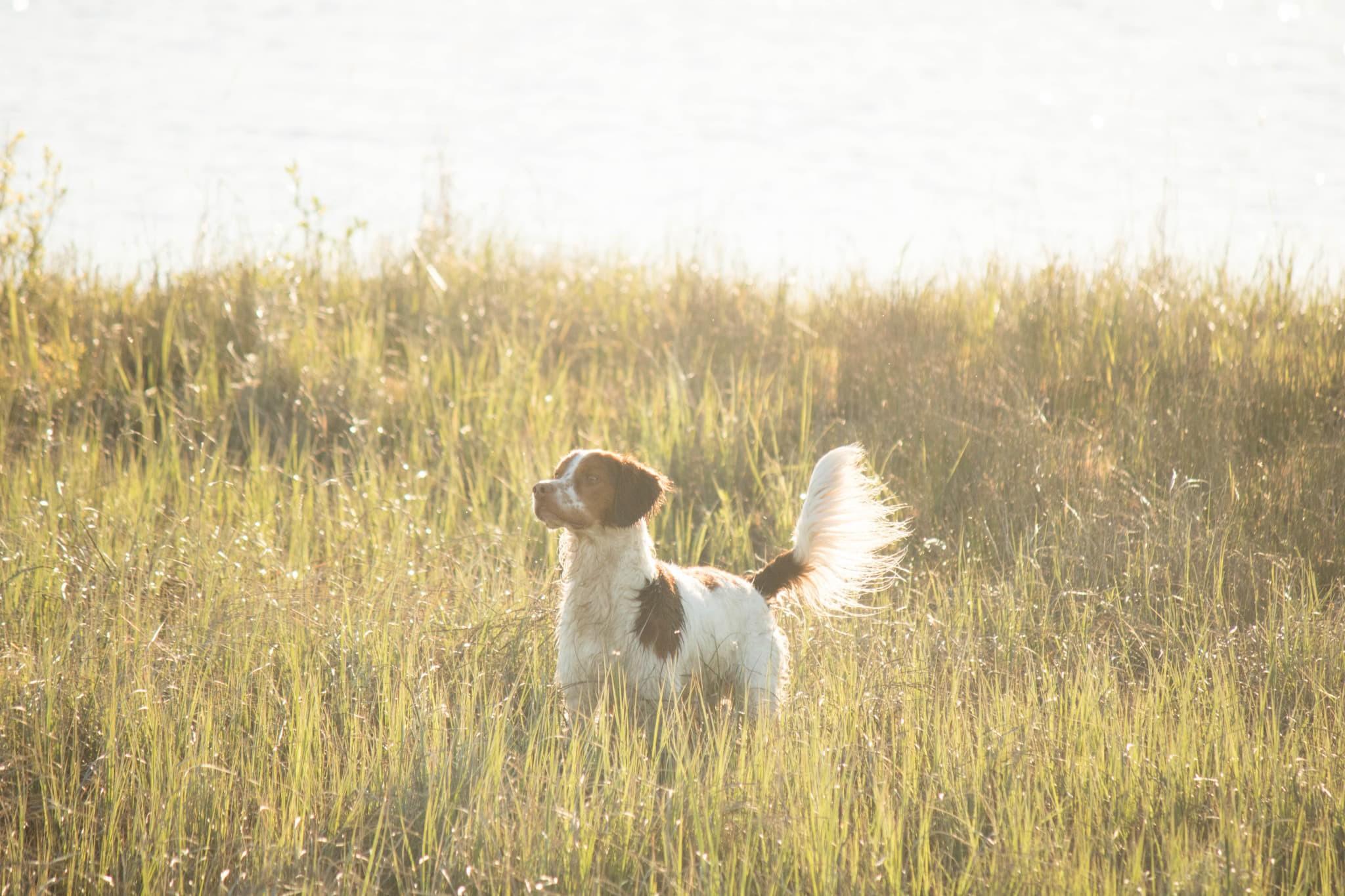 FUNCTION OF TAILS AND DEWCLAWS

Peter J. Lotsikas and F.M. Lotsikas summarized, "It is worthy to note that the dewclaw of the forelimb paw is the equivalent of a human thumb. Although it appears rudimentary in day-to-day activity, it is of vital structural importance to the wrist. As a dog takes sharp turns at speed, or comes down a steep contact, the dewclaw offers additional grip and stability". Removing dewclaws may destabilize the toes and paws, especially while turning, resulting in increased abnormal stresses on the wrist that may lead to arthritis(2).

Our anecdotal experience confirms that dogs run, jump and turn better, longer, with the support of intact tails and dewclaws. While searching in the winter, our dogs occasionally get paw and forelimb injuries, but we have not yet had a dewclaw injury.

For example,  Boo is my 12 year old bed bug detection dog and bird dog, and he has intact dewclaws. As of Feb. 2021, Boo has experienced one nail injury, it was not his dewclaw, but another nail that was ripped off when it got stuck in a mesh metal surface.

In this video, Rickard (a 2-year old Brittany), demonstrates how a dog can use their tail to help store energy, and then jump up to catch a ball. Combined with appropriate conditioning, these skills help him to search for human remains in the field and find bed bugs in dense debris piles.

Please note that other breeds may have different anatomy, such as double dewclaws and rear dewclaws. Do your research on the specific breed of dog you are considering, and learn about their unique physiology and requirements.

As of January 2023, the Canadian Kennel Club allows Brittanys to be shown with intact tails and dewclaws. Per the CKC Zone 10 – Member Resources Facebook Page,

“to ensure that Exhibitors and Judges consider local and regional laws and restrictions, the following directions are being communicated to Conformation Judges:

FCI Rules for International and World Dog Shows “The judging of docked and undocked or cropped and uncropped dogs must be done without any discrimination” (page 6).

If you prefer for your puppy to have their tail and dewclaws removed, please get in touch with another breeder, as many  Brittany breeders in North America follow that traditional practice.

We’re delighted to see that more dog breeders and owners are leaving tails and dewclaws intact than ever before. Intact tails and dewclaws support optimal health and performance, and we look forward to watching dogs with tails in all dog events in the future.